The Pride and Prejudice Bicentenary Challenge 2013

I've decided to move this challenge to my new book review blog, Books With BettieLee, on Wordpress. I've changed the dates I'll be posting as well. Click here to read the updated post. 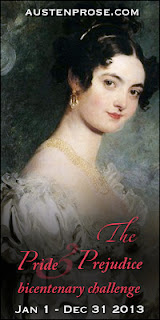 I previously mentioned that I am doing a few challenges this year. One of them is the brainchild of the Austenprose blog. Here is the post with the official-ly rules and such. The impetus is the 200th Anniversary of Pride and Prejudice. The idea is to read and review Pride and Prejudice itself, or the prequels, sequels, re-tellings, variations, books, movies, miniseries, etc. and then review them on your blog, or if you don't have a blog, you can leave your review in the comments in the review posts at Austenprose. If you wish to participate, please read the original post and follow the instructions. There are prizes and everything!

The first thing to do is to pick the level of participation you want to commit to:  Neophyte: 1 – 4 selections, Disciple: 5 – 8 selections, Aficionada: 9 – 12 selections. I'm going full on Aficionada. :) Below are my selections, linking to descriptions on Goodreads or IMDB, and the date the deliciousness will hit the bloggery. I'm going mainly with books, except for the one movie choice in February. I can't talk enough about Matthew MacFadyen as Mr. Darcy

There is nothing sexier than a tall, surly, dark-haired Englishman. Heathcliff. Mr. Rochester. Mr. Thornton... oh Mr. Thornton. But Mr. Darcy is the archetype... I blame PBS for this unnatural predilection.

Pride and Prejudice is one of my favorite books. Can you believe it was the only Jane Austen book I read for years and years? I was afraid the others wouldn't hold up. I tend to cling to the familiar. At some point I kicked myself in the metaphorical keister and read all of them. I promptly regretted my foolishness. I've probably gone on to love Northanger Abbey as much as P&P. I just recently read my first Austen-sequel, and it was a continuation of Catherine and Henry Tilney's adventures. A proper gothic romance. I really enjoyed it. I'm looking forward to a year of the Darcy's... I tried to pick "fan favorites" or those that tend to the dark and mysterious.... mwah ha ha! I'm ending the year (at least so far as I have mapped out) where it began - the first Austen sequel written in 1919. I am even going to read that damn zombie book.... Don't judge me.
Posted by bettielee at 9:26 PM

bettielee
I'm an aspiring writer of many genres, but they are all speculative. When not toiling on my tomes, I work in a cube of despair for a plumbing company. It's allllll very glamorous, I'm sure. 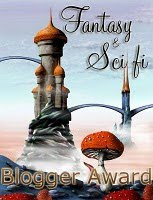 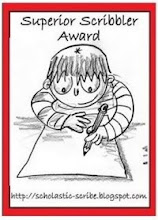